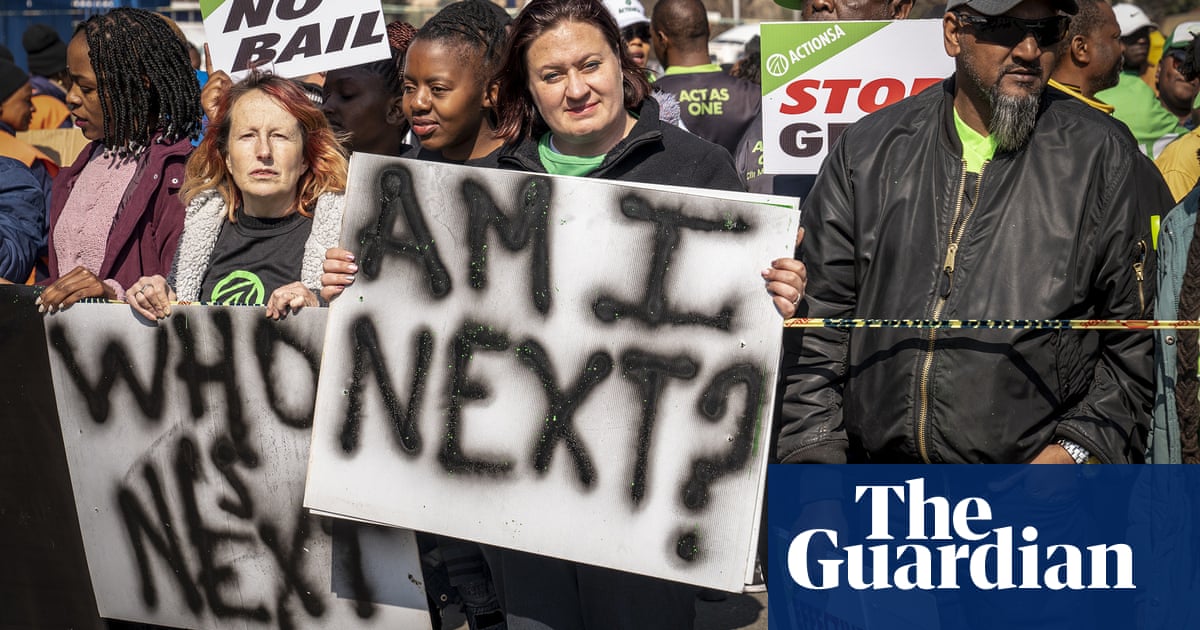 Dozens of men detained after the alleged gang-rape of eight women on a music video shoot in South Africa are expected back in court on Wednesday as police made more arrests of artisanal miners blamed by local people for widespread violence.

The arrests on Tuesday near Krugersdorp, a city north-west of Johannesburg, bring the total number of people detained since the attack to more than 120.

None of the men and boys arrested, however, has reportedly been charged with sexual assault or rape. Police have said they hope DNA tests will enable them in coming days to connect some of those detained with the alleged gang-rape.

The men expected in court on Wednesday, who are understood to be miners working in South Africa’s dangerous abandoned shafts, reportedly face charges including possession of firearms and illegal mining.

On Monday, the South African president, Cyril Ramaphosa, implored members of the public to come forward to help find those who carried out last Thursday’s attack.

“These horrible acts of brutality are an affront to the right of women and girls to live and work in freedom and safety. We call upon communities to work with the police to ensure that these criminals are apprehended and prosecuted,” he said.

The attack took place at an abandoned mine in Krugersdorp where the video crew of 22 people, including 12 women, were filming when they were attacked “by a group of armed men clad in blankets”, according to a police statement to the Associated Press.

“The suspects ordered everyone to lay down and proceeded to rape eight of the women and robbed everyone of their belongings before fleeing the scene,” said the police commissioner for Gauteng province, Lt Gen Elias Mawela. Police were investigating 32 counts of rape, he added.

The attack has shone a spotlight once again on South Africa’s chronic problem of gender-based violence. In the first three months of this year, at least 10,818 cases of rape were reported, an increase of 13.7% over the same period in 2021. Far from all such incidents are reported and the real number is believed to be much higher.

In Krugersdorp there have been complaints that the police and local authorities have not done enough to protect women and girls from crime. On Friday, after police made the first arrests, a resident was filmed haranguing police minister Bheki Cele over the security situation in West Village, a part of Krugersdorp.

Most of the anger is directed towards the miners, or zama-zamas, who come to South Africa from countries including Mozambique and Zimbabwe to try to eke out a living in the country’s thousands of disused goldmines. They are blamed by local people for crimes such as muggings and sexual assault. Human rights groups warn that they are themselves the target of entrenched xenophobia.

More than 80 zama-zamas arrested on Friday and Saturday appeared at Krugersdorp magistrates court on Monday, when it emerged that about 20 were juveniles who should be tried in the child justice system. Outside the court hundreds of people – including from the anti-migrant group Operation Dudula – held a protest accusing the police of not doing enough to maintain order.

The arrests on Tuesday appeared to be a crackdown in response to general allegations of criminality levelled at the zama-zamas rather than an operation specifically connected to the gang-rape.