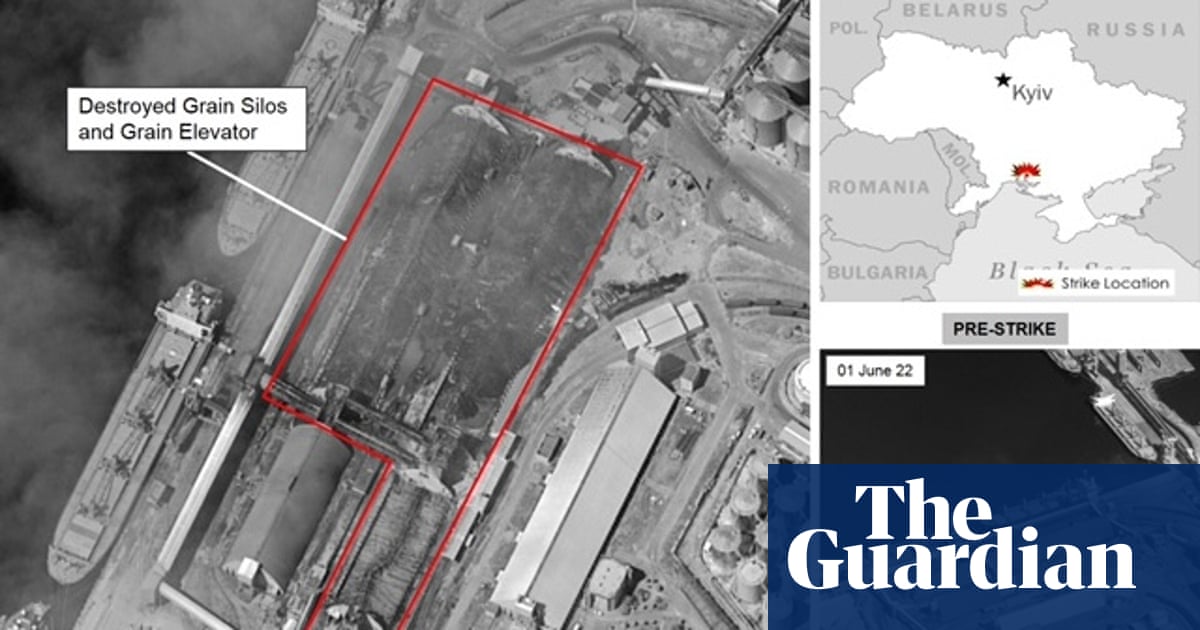 The Russian navy has been given orders to lay mines at the ports of Odesa and Ochakiv, and has already mined the Dnieper River, as part of a blockade of Ukrainian grain exports, according to newly declassified US intelligence.

US officials also released satellite images showing the damage inflicted by Russian missile strikes earlier this month on Ukraine’s second biggest grain terminal at nearby Mykolaiv, at a time when the interruption of grain exports threatens to trigger a global famine. Sunflower oil storage tanks at Mykolaiv came under attack on Wednesday.

Russia has denied laying mines around the Black Sea ports, and has turned around the allegations on Kyiv, claiming instead the Ukrainians have mined their own ports.

The US says its intelligence points to a concerted Russian strategy to cut off the stretch of the coast still under Ukrainian control. “The United States has information that the Black Sea fleet is under orders to effectively blockade the Ukrainian ports of Odesa and Ochakiv,” a US official said.

“We can confirm that despite Russia’s public claims that it is not mining the north-western Black Sea, Russia actually is deploying mines in the Black Sea near Ochakiv. We also have indication that Russian forces previously mined the Dnieper River.”

“The impact of Russia’s actions, which have caused a cessation of maritime trade in the northern third of the Black Sea and made the region unsafe for navigation, cannot be understated, as Ukraine’s seaborne exports are vital to global food security,” the official said, pointing out that Ukraine supplied a 10th of global wheat exports and about 95% of those exports left the country through the Black Sea ports.

Alternative land routes are being examined, while the UK has offered technical expertise to Turkey, which has offered to escort cargo ships through the Black Sea. But Ankara said it had not been able to fix a date for a meeting with Russian officials to discuss the proposed grain convoys.

The US also declassified satellite images on Thursday showing the scale of damage inflicted in a 4 June Russian attack on the Nika-Tera grain terminal in Mykolaiv, the second biggest in Ukraine.

“The image makes clear that the Russian invasion of Ukraine has led to the destruction of three of the site’s grain silos as well as the conveyor system that loads grain on to vessels,” the US official said. “Because of Russia’s attack, the export capacity of the grain terminal has been reduced by at least one-third.”

Video footage released on Thursday also showed serious damage to at least two storage tanks for sunflower oil at a terminal in Ukraine’s Black Sea port of Mykolaiv, caused by a Russian missile strike on Wednesday.

The Kremlin has formally denied trying to trigger a global famine, but earlier this week Margarita Simonyan, the head of the Russian propaganda outlet RT, suggested that was the strategy.