Russia’s invasion of Ukraine would likely not have happened if President Vladimir Putin was a woman, Britain’s Boris Johnson said Tuesday, adding that the Russian leader serves as a “perfect example of toxic masculinity.”. 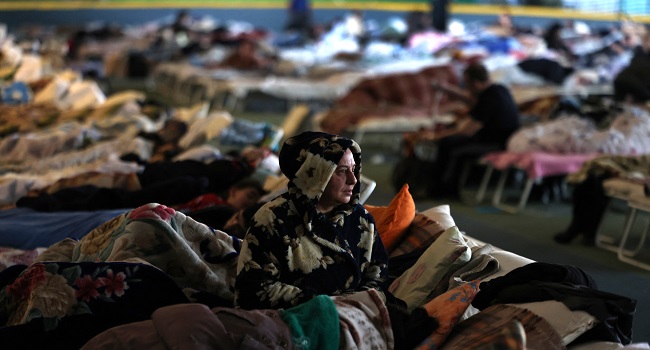 LONDON — What’s to blame for Russia’s invasion of Ukraine? In part, Russian President Vladimir Putin’s “toxic masculinity” — according to British Prime Minister Boris Johnson, in remarks that triggered a dose of sarcasm from the Kremlin and apparent approval from other world leaders.

“If Putin was a woman, which he obviously isn’t, but if he were, I really don’t think he would’ve embarked on a crazy, macho war of invasion and violence in the way that he has,” Johnson told German broadcaster ZDF on Tuesday, adding that “if you want a perfect example of toxic masculinity, it’s what he’s [Putin] is doing in Ukraine.”

Russia fired back on Wednesday, saying, “Old Freud during his lifetime would have dreamed of such an object for research,” Kremlin spokesman Dmitry Peskov told Russian state-owned news agency RIA Novosti. He referred to Austrian neurologist Sigmund Freud, who founded psychoanalysis and had several controversial theories about masculinity.

Johnson made the comments in a German television interview days after the war entered its fifth month, a devastating conflict that has destroyed cities, displaced millions and killed thousands of civilians.

Scottish First Minister Nicola Sturgeon, when asked about Johnson’s comments on the British television show “Good Morning Britain,” said she did “unusually perhaps, agree” with his comments regarding women in politics.

Sturgeon, who leads the pro-independence Scottish National Party and has often clashed with Johnson’s government in London, called Putin a “war criminal” and went on to say that “the world would be a better place if there were more women in positions of leadership.”

“I think it is important we don’t generalize,” she said. Women make mistakes as well as men make mistakes. But I do think women tend to bring more common sense and emotional intelligence and reasoned approach.”

Ukrainian President Volodymyr Zelensky on Tuesday demanded that world leaders at the United Nations take further steps to punish Russia, following an escalation of missile attacks and airstrikes on civilian targets — including a shopping mall in the city of Kremenchuk earlier this week that killed at least 18 people and injured dozens more.

“Voting Tory will cause your wife to have bigger breasts and increase your chances of owning a BMW M3,” the Conservative leader said in 2005, according to British media.

Johnson’s comments came just days after he and Canadian Prime Minister Justin Trudeau joked about going shirtless to threaten Putin with “our pecs” during the opening of the Group of Seven summit in Germany on Sunday.