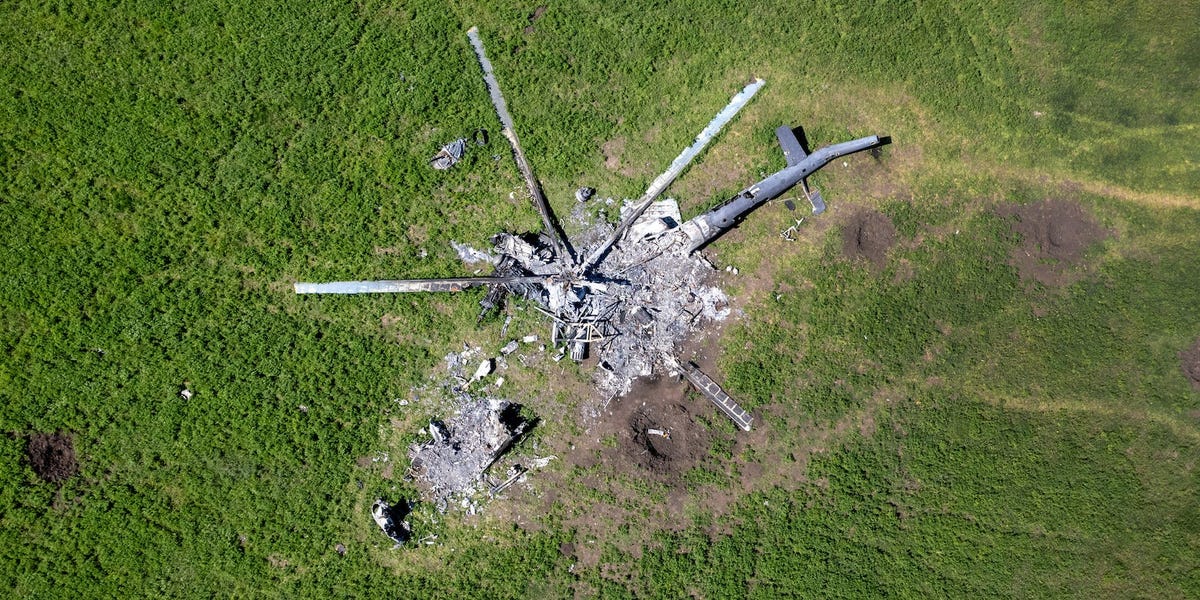 Instead of the quick Russian victory that Moscow and much of the world expected, the war in Ukraine has dragged on for nearly four months, with both sides losing thousands of troops and hundreds of aircraft and vehicles.

The havoc wreaked by drones and other light, portable weapons has spurred renewed debate about the vulnerability of heavy-duty military hardware on modern battlefields — including helicopters, which are integral part of many militaries plans to maneuver and fight.

In a recent column in Aviation Week, defense and aerospace analyst Sash Tusa argued that the technological advances in sensors and anti-aircraft weapons on display in Ukraine is evidence that air assault and helicopter combat missions in general are becoming less viable.

In the opening hours of the invasion, elite Russian VDV airborne troops tried to capture the Hostomel airbase near Kyiv with an air assault. Dozens of Mi-8 transport helicopters, guarded by Ka-52 Alligator attack helicopters, ferried an assault force of paratroopers to the Ukrainian airfield.

The Russian air assault was ultimately a failure, as the Russian military failed to reinforce its airhead with follow-on forces and the Ukrainians counterattacked in force.

The failure of that mission — which resembled how the US and other major militaries would conduct air-assault operations — “should have been a shock to many observers,” Tusa writes, adding that Ukrainian use of artillery and of shoulder-fired anti-aircraft missiles thwarted Russian efforts to reinforce at Hostomel and have deterred Russian helicopter operations for much of the war.

US air-assault doctrine, which the Pentagon has tried to instill in partner forces, including the Afghan and Ukrainian militaries, relies on technological and numerical superiority in advanced weapon systems, which is not representative of the capabilities of US allies and partners.

US conventional and special-operations units are accustomed to operating with US air superiority, but that is not the case for almost all other air forces. Indeed, it might not be the case for the US in war with China or Russia, which can both field an array of anti-aircraft weapons.

Long- and medium-range anti-aircraft weapon systems, such as the S-200, -300, and -400, are making high-altitude flights dangerous for both sides. At the same time, man-portable air-defense systems are making life below 10,000 feet hard for aircrews. Ukrainian forces have even used anti-tank missiles to shoot down low-flying Russian helicopters.

Russia has reportedly lost close to 200 helicopters. Ukrainian aircraft losses are uncertain but likely high. There are several factors behind the heavy losses of rotary-wing assets for both sides.

To begin, most rotary-wing operations in Ukraine have taken place during the day. Neither side has the US militarys night-flying capabilities, so they have to take the risk of daytime flying. In addition, neither side has potent countermeasures that would help their aircraft fend off incoming threats.

Coker, an AH-6 Little Bird gunship pilot and author of “Death Waits in the Dark,” spent 30 years in the US military, completing 11 combat deployments with the vaunted 160th Special Operations Aviation Regiment, nicknamed the “Night Stalkers.”

US military helicopters have special equipment, including active and passive technologies, designed to defeat infrared missiles, like Soviet-origin SA-7 and SA-14 anti-aircraft missiles that are shooting down helicopters in Ukraine today.